LOS ANGELES – Prior to the OCC’s May 2020 rule modernizing the Community Reinvestment Act (“CRA”), there had not been a major revision to the CRA since 1995. Although it was painfully obvious that technology had drastically changed the banking industry during that 25-year period (e.g., reduced reliance on brick and mortar buildings in favor of more convenient and far reaching mobile and online services), there has been significant resistance to changing the CRA’s outdated framework. Fortunately, the U.S. Senate voted 48-43 on Monday to reject a resolution that would have blocked the OCC’s final rule from going into effect. As a result, we now have a much better framework for organizations to help break the cycle of poverty and neglect in America’s most vulnerable communities.

The OCC’s rule to modernize the CRA takes meaningful steps forward by: (a) clarifying and expanding what qualifies for CRA credit; (b) expanding where CRA activity accounts; (c) providing an objective method to measure CRA activity, and (d) revising data collection, recordkeeping, and reporting. These changes provide more transparency and greatly improve the ability of community-based organizations to advocate for their communities (and hold less engaged financial institutions accountable). 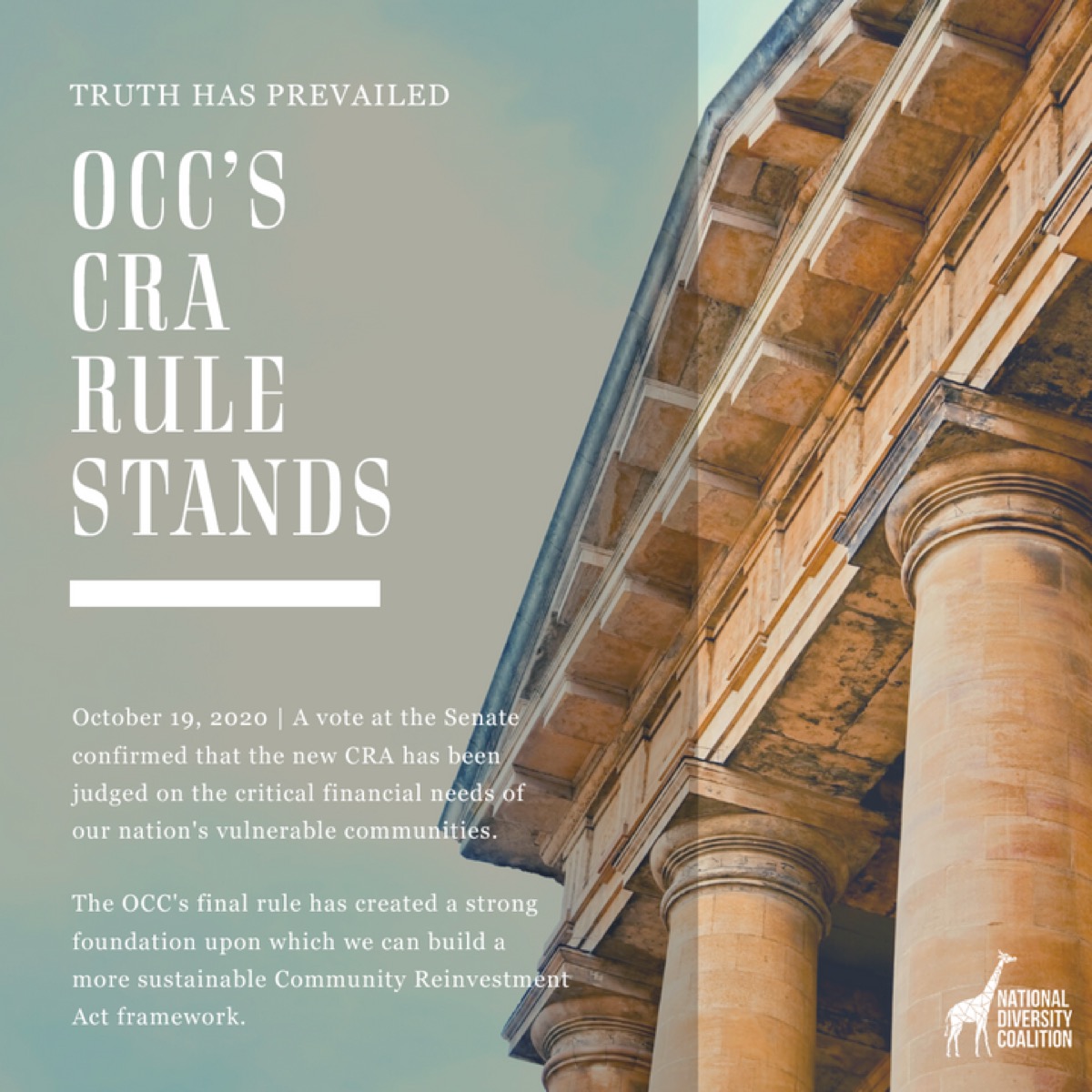 We have always believed that leaders must be brave, especially when faced with opposition and at times, unfair criticism. The OCC’s courageous action to modernize the CRA now paves the way for other agencies to take similar steps forward. Significantly, the Federal Reserve recently published its own advance proposal for CRA reform. The Federal Reserve’s proposal has a significant overlap with the OCC’s final rule, with approximately 85% similar to the OCC’s final rule. We are pleased to see these other federal agencies publicly acknowledging the need for CRA modernization to better help our low-income and underserved communities.

As policymakers and community organizations continue to build a framework to ensure fair access to capital for all, National Diversity Coalition feels privileged to have been part of this process and congratulates all who have worked so hard to modernize the CRA so we can better achieve its worthy objectives.

Asian American Strong: a statement from Faith Bautista on the Atlanta Shootings of Asian Women